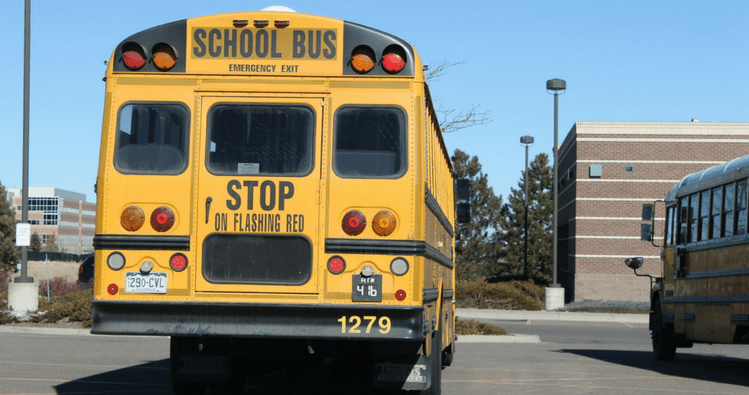 Did you know the third full week of October is National School Bus Safety Week?

Two years ago, the theme was “# STOP ON RED!” When that school bus stop sign arm is out, all vehicles need to stop. In 2018, NAPT brought focus to a critical part of a school bus, the bus driver. The theme was “My Driver – My Safety Hero!”

Here we are in 2019 and the National School Bus Safety Week theme is “My School Bus, the Safest Form of Student Transportation!” If you’re looking for safety tips, download the Kajeet Technology Checklist for a Safer School Bus.

The Changing Role of the Bus Driver

Ninety-seven percent of education transportation professionals say the school bus driver’s job has become more complicated. The role of the bus driver is changing as technology advances and different student safety techniques are brought into the picture.

Linda F. Bluth, Ed.D, a consultant with the Maryland State Department of Education describes the bus drivers role best when she said, “Today’s demands on the school bus driver require a combination of up-to-date technology resources and exemplary behavior management training. The importance of both should not be underestimated.”

The number one priority of every school bus driver is to safely transport their students, which is why this National School Bus Safety theme is great. Bus drivers do more than pick up and drop off students; they are the students first and last interaction with school every day.

A Kajeet and School Transportation News bus Wi-Fi survey found bus driver retention as the third top benefit to having Internet on the school bus.

And bus driver shortages are top of mind for most transportation departments. School Bus Fleet found:

If students’ behavior is improved, bus drivers may be more inclined to stay at their job. This is especially true for bus drivers with long routes full of rowdy students. For those drivers with an hour-plus ride, a well-behaved bus is critical.

An experienced school bus driver who is happy and focused at their job means a safer ride for students.

And the ASBC states, “students are about 70 times more likely to get to school safely if they take the school bus instead of traveling by car.”

All around, school bus safety is paramount to ensuring all bus riders – and drivers – make it to their final destination safely. Take time this week to promote school bus safety tips in your schools and districts.

And for those teachers or parents who help with bus stops, here are some great tips from NAPT on keeping students safe at the bus stop.

In honor of the National School Bus Safety Week, we would like to continue NAPT’s focus on school bus safety, particularly inside of the bus.

School buses can be safer when students behave on the bus. School administrators are continually looking for solutions on how to handle bus discipline.  According to a recent survey of school administrators by Kajeet in conjunction with School Transportation News, a main benefit to providing Wi-Fi on the school bus is a decrease in bus behavior incidents and/or referrals.

But school-provided Wi-Fi should not be just any open-access Wi-Fi. The Kajeet SmartBus™ program includes safe, CIPA-compliant filters, which keeps students on educational sites only.

Beekmantown Central School District located in upstate New York had similar responses from their bus drivers. The case study states, “Veteran bus drivers immediately reported students were engaged and working on assignments during their commutes instead of getting into the kind of trouble, often arising from boredom.”

And that’s not all. “When it comes to discipline issues, the bus often represents one of the most challenging environments for many schools, but since the SmartBus program began, behavior incidents at Beekmantown have declined by 50 percent,” continued the case study.

And less behavior incidents leads to a safer ride for students and bus drivers as well. When drivers can focus on the road, and not on managing the behavior of 70 students, the bus ride is safer overall.

For the 2017 #STOP ON RED! we provided safety facts from The American School Bus Council (ASBC), particularly in regard to motorists who fail to stop and drive around the bus.

But despite those stats, only 0.4 percent of fatal motor vehicle traffic crashes from 2006 to 2015 were related to school transportation, i.e. school buses, according to the National Highway Traffic Safety Administration (NHTSA), which makes school buses still safer than cars. However, NAPT hopes to reduce that number even further.

Don’t forget to join the conversation on Twitter with #NSBSW and share how your school or district is highlighting your bus drivers!

What does your school do for National School Bus Safety Week? We’d love to hear in the comments below or tag us on Twitter with @Kajeet.