5 Ways Connected School Buses Are on the Rise 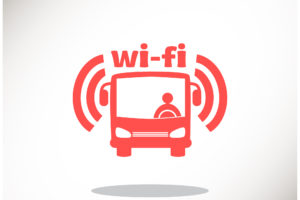 School buses are increasingly equipped with wi-fi to extend internet access to students who lack it at home.

As internet connectivity becomes a necessity for schools and students, there is a new call for the government to make school bus wi-fi eligible for federal E-rate funding.

The trend is growing. More and more, school buses are equipped with wi-fi to give students connectivity while they are on their way to and from school and during travel to extra-curricular activities.

School bus wi-fi also is viewed as a way to close the persistent homework gap that occurs when students have internet access during school, but lack it at home. Many schools are developing initiatives to park wi-fi enabled buses in school communities after school to help more students connect when the school day ends.

Specifically, Sen. Udall is calling “on the Commission to use its existing authority to allow E-rate to support school bus wi-fi service in a manner that is both technically feasible and economically reasonable.” Sen. Udall also said he will introduce legislation that would give the FCC flexibility to do so if it does not currently have the authority to expand the E-rate in this manner.

Below are five examples of how school buses with wi-fi are helping close the homework gap and give more students much-needed internet access.

1. Last fall, Miami-Dade County Public Schools in Florida began a school bus-based wi-fi program pilot in partnership with Kajeet. The district’s “Wi-Fi-on-the-Go” program aims to provide students the opportunity for mobile learning on the school buses. Students can study, learn, communicate with teachers and collaborate on class assignments to and from school and extra-curricular excursions. Using the same CIPA-compliant proprietary filtering as the Kajeet SmartSpot device, the company now provides the complete solution for districts including the hardware, data, filtering and installation with its new Kajeet SmartBus solution.

2. Alabama’s Decatur City Schools began a pilot in January to give students around-the-clock access to the internet. “We’re having to be creative in our approach to make sure all our students can access the internet,” DCS technology director Kathy Rains said at the time. Students at Julian Harris and Cedar Ridge Middle experimented with a device that made a bus a Wi-Fi hub before they left school for the holiday break. The device, which is about the size of a cellphone, gave students internet access from the moment they got on the bus until they arrived home.

3. Near the shore of the murky Salton Sea in the Southern California desert, a bus drives up to West Shores High School each day with a critical connection: A wi-fi router mounted behind an interior mirror, providing internet access for students whose homes aren’t wired. At night, the bus driver parks more than 15 miles away on a sand driveway in a mobile home park. There, the hotspot is available to students as long as the battery lasts. On most nights, it fades after one hour.

4. The Huntsville Independent School District in Texas is deploying wi-fi connectivity on its school buses to help extend students’ internet access in a rural area where many students lack home connectivity. The district covers a large geographical area of nearly 650 square miles, and some students spend up to 90 minutes one-way on a bus to school. Huntsville partnered with Presidio to deploy 3G/4G connectivity for wi-fi on district school buses, along with rugged Intel processor-based tablets for student tracking and driver information.

5. Georgia’s Liberty County School System will outfit its school bus fleet with wi-fi in an effort to extend the school day. Liberty County also will create 24 “Homework Zones” around the county by parking their Kajeet wi-fi-enabled school buses in areas including apartment complexes and fire and police departments from 2:30 p.m. to 11:30 p.m.