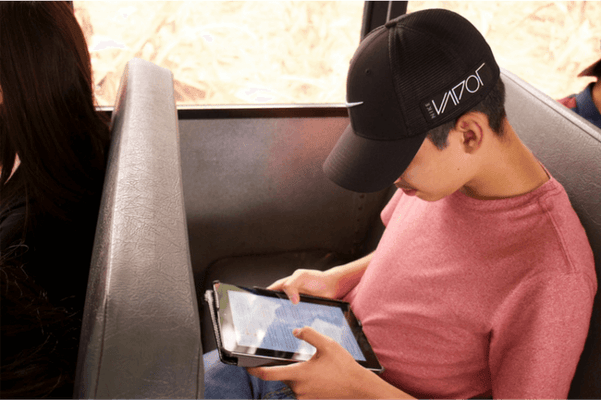 CVUSD - A student of the Coachella Valley Unified School District uses a tablet during the school bus ride.

Digital access has become not only more commonplace, but also necessary in some cases. One example of this is education, where connectivity has become an integral part of learning. For students who do not have access to the internet at home due to a lack of resources, this can become a roadblock to success.

Dr. Darryl Adams, superintendent of the Coachella Valley Unified School district, which serves the desert community surrounding Coachella, California, decided to take it upon himself to bridge the digital divide among the students in his district, which is among the poorest in the nation.

The district launched a 1:1 program in 2013 in order to equip all of the district’s students with a tablet for use at school and home. But administrators soon discovered that there were students who did not have access to Wi-Fi once they got home, which made it difficult to get any work done on the tablet.

Adams decided that the solution to this dilemma was one that was maybe not so obvious: The school bus, specifically adding Wi-Fi routers to these. With the district covering 1,250 square miles of desert, some students were on the bus for over an hour and he figured they could benefit from the connectivity to get homework done. The district created the hotspots using Cradlepoint software-defined 4G LTE solutions.

Adams also decided to have school buses park in communities where there was no internet access.

“If we’re going to have Wi-Fi on the bus, why not park the bus? Buses are not in use from the time school is out until the next morning,”

“If we’re going to have Wi-Fi on the bus, why not park the bus? Buses are not in use from the time school is out until the next morning,” he said, adding that some students without access would do their homework in the evenings in the district parking lot in order to have connectivity. Adams figured that by parking the buses around the neighborhoods after school was out for the day, these and other students would be able to do their work from the comfort of their homes.

Students received training from the district on how to properly and responsibly use the Wi-Fi technology. Adams said that the district has a great filtering system that enables administrators to know how the data is being used.

“We know what’s going on in that system and its mostly school work,” he said.

The district then did research to determine what communities had the greatest need. In the case of some of the trailer park communities, the district had to obtain the support of the property managers in order to park the bus. For those communities that received a bus hotspot, Adams said that the district made a type of “partnership agreement,” where the communities agreed that if the district placed a bus there, the residents would agree to protect and take care of it. He added that some of the community managers have access to the bus keys because they wanted the ability to be able to enter the bus and shut off connectivity at night to ensure students are not up late.

“We just work together to make sure we’re maintaining that bus,” he said.

An issue that quickly became apparent with the parked buses was the fact that heavy data usage would very quickly drain the school bus battery. So Adams, a former musician, got creative once more.

“I figured we’re in the desert, we have plenty of sun, put a solar panel on the thing,” he said. “If you think outside the box and are creative, there’s a solution for everything.”

The district also decided to make use of salvaged district vehicles, such as vans and other buses, and park them around the community as hotspots.

Adams said that the district has seen very positive results since the start of the program. High school graduation rates have jumped from just below 70 percent to approximately 82 percent. Discipline problems have decreased because students are now focused and engaged.

“I’ve been told we’re the second poorest district in the nation. So for them to have access to learning, to online classes to research, to communication, collaboration, it really is a game-changer for our students and families,” he said. “They’re no longer at a disadvantage. I tell them, ‘You’re no longer in the column of the have-nots, you’re in the column of the haves.’”

All of the district’s 100 buses are now equipped with wireless connectivity. Adams said that the district is looking to become its own internet service provider in the future.

The efforts of Adams and his staff were spotlighted by President Obama at a ConnectEd conference in 2014.

“This is really smart,” Obama said at the time. “You’ve got underutilized resources—buses in the evening—so you put the routers on, disperse them, and suddenly everybody is connected. Now it’s not just students that can get online. It’s their families as well.”

Another school district that has implemented wireless connectivity on the school bus is Beekmantown Central School District in upstate New York.

The idea for this program came about a year and a half ago during a conference that Superintendent Dan Mannix and Gary Lambert, director of 21st century learning were attending. Representatives from Kajeet, a wireless provider, were discussing their Wi-Fi offerings for school buses. The district had already previously worked with the company in order to provide mobile hotspots for students without access at home. The two decided to find out more about the Wi-Fi option. Using a portion of grant money, they decided to bring connectivity to six buses.

Lambert said that the district’s mechanics took care of the installation with tech support from the company.

“It was probably one of the most responsive offsite tech support companies I’ve ever dealt with,”

He said another feature they found impressive about the Kajeet product was its comprehensive filtering system, which can be used concurrently with the district’s filter to ensure nothing slips through the cracks.

The routers went on the buses that spend the most time on the road. So far, Lambert said that both drivers and students have responded very well.

“One of the veteran bus drivers who drives a Wi-Fi bus, has noticed that incidents of misbehaviors have really decreased dramatically. If you have students that are engaged while they’re on a bus, they’re going to be a lot less likely to act out,” he said.

Bringing the Wi-Fi to the buses made sense for the district because of its focus on “extended learning,” or making the best use of the time students have for learning. Wi-Fi on the school bus ensured that students also had opportunities for learning on the ride to and from school. As some have said, the school bus can serve as an extension of the classroom.

“I don’t think many people have really thought about it this way, but buses are an extension of a school district,” Lambert said.  “They are a mobile classroom, whether electronic or otherwise, and we’re now just making that more possible to be a fully integrated classroom.”

“Clearly, when we give kids the ability to take home a Chromebook, we have them learn at home. And now the same is true on your way home. Our kids are so busy, travel home and then jump in a car to little league practice. Now you can do homework on the 45-minute bus ride,” Mannix said.

Mannix also reported that approximately half of the district’s students are eligible for free and reduced lunch, and that ensuring that they can access the internetso that they have equal opportunities for success is crucial.

“We really believe that it’s kind of a moral imperative that we level that internet availability playing field for our kids, and this is one small way we can do that. How to close that gap in digital equality is a conversation we have often around here,”

The district is looking into securing the grant funds to add connectivity to six more buses.

CHCCS Board of Education to Fund WiFi

Davenport Schools Anxious to Return to