Education Advances on the Road 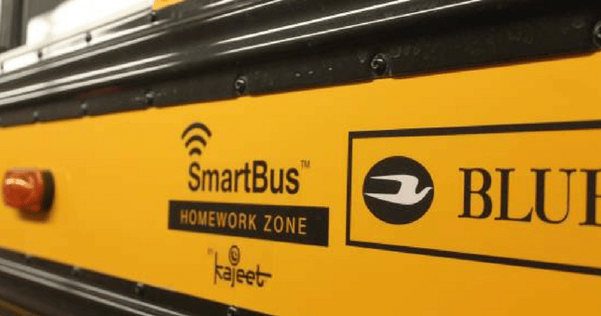 Educational opportunities have been enhanced in the Spencer Community School District through the installation of a Wi-Fi router on one of the school buses which transports students to and, from extra curricular activities as well as normal routes. The district’s first SmartBus™ was outfitted with a router on Jan. 9 and was configured to block access to any noneducational sites, including all social media sites.

Spencer School District Director of Transportation Julie Nemmers began looking into how well SmartBuses were utilized in other districts during the summer of 2016.

“About October we got serious about it. Mitch (Dowhower, director of technology) and I started checking out companies that provide Wi-Fi installation and the software. We came up with Kajeet. They are the number one company,” Nemmers said. 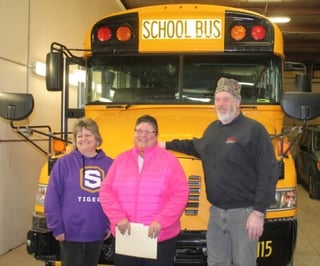 The installation of the system would cost the district approximately $2,300 for a single bus. Were they to install it on the entire fleet of 18 buses, it would cost approximately $45,000, though Nemmers does not foresee that happening.

Additionally, any cost for the Wi-Fi data would be tacked on to the district’s standing internet expenses.

Prior to purchasing the system, the district made a deal to test the system and monitor how effectively it was utilized by the students. The company agreed to allow the district to have a trial period with the system at no cost.

Since the installation of the Wi-Fi system, Diane Feezor has been assigned as the full-time driver of the SmartBus. According to Feezor, the system has been well received by all the students, from preschool to seniors.

“Probably the biggest disappointment to the kids was that social media was not on there because it is blocked out,” Feezor said.

She went on to explain how the system can benefit the students on an educational level.

“If you take an activity trip just, for instance, to Sioux City. That is a two-hour trip there. ... By the time they get home, it’s probably 11 o’clock at night, and it’s too late to be doing (homework) then. So, they have four hours there of homework time,” Feezor said.

According to Nemmers, the district’s biggest priority for installing the system was to make use of the bus time in an educational way.

“We have a lot of activities, and we have a lot of kids participating. That is one their concerns as a kid and as a student. How do they get their homework done and have good grades and still be active in these activities,” Nemmers said.

During the trial period, Nemmers found the system has been utilized and enjoyed by the coaches as well as the students. She stated that the school coaches utilize the system to complete updates and postings before arriving home.

As the trial period nears its end, the school will decide whether to move forward and permanently install the system.

“I think we will be putting more in, without a doubt. It will probably be a summer project if we move forward with it,” Nemmers said.

“We will probably start with activity buses then go with the routes,” Nemmers said.

A final decision on the system will be made after the data collected throughout the trial has been analyzed.