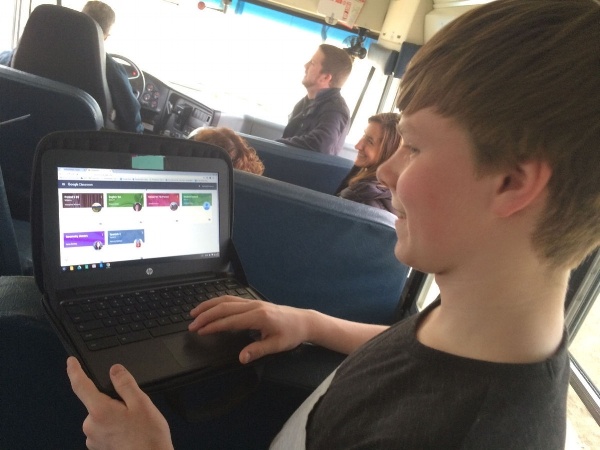 Hudson Falls High School freshman Shawn Norton, 14, demonstrates Tuesday how he can access the Internet while on the school bus because of a new wireless access point that has been installed on three buses. 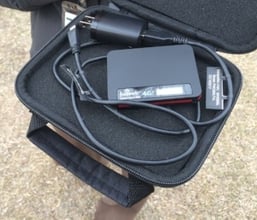 It is difficult to get time to do homework, especially on trips to sporting events. However, new this school year, the district has 23 mobile SmartSpot devices from a company called Kajeet, which can access a 4G network through Verizon.

Three wireless routers on school buses have also been installed.

Norton explained that he is logged into Google all the time. When he turns on his district-issued Chromebook, it recognizes the wireless access point and he can get on the internet.

“I can use the Kajeet to get my homework done, so I’m not falling behind in school,” he said.

Two wireless units have been installed on designated buses and the third one will be mobile, so it can be put on a different bus if students are taking a field trip, according to Christine MacPherson, the district’s director of instructional technology.

MacPherson said this technology will help students who are traveling to the far-flung reaches of the district.

“You’re talking about students that could be on the bus an hour or more on any given day,” she said.

In addition to Hudson Falls, the district goes into Argyle, Granville and Hartford, according to transportation supervisor Tom Murphy. Sports bus runs take students to competitions in Amsterdam and Johnstown.

Murphy said it helps out the bus drivers. Students are less restless and there are fewer problems.

“It’s great for student management on long trips. They can access the internet and do their work,” he said.

The initial cost was about $6,000 to set up. The district has a pooled data plan, according to MacPherson.

“Whatever doesn’t get used gets rolled over,” she said.

The district will receive some aid reimbursed through BOCES.

The data has a software program called GoGuardian that prevents them from logging onto certain noneducational sites and monitors their internet access, according to network analyst Kevin Tucker.

Network analyst Brandon Burch said the district can also track whether someone is running many applications that require a lot of bandwidth, such as watching videos, so one or two students don’t use up all the data.

Freshman Hannah Burch, 14, said it is easy to go onto the internet.

“It works good,” she said Tuesday.

MacPherson said it is an equity issue for students who do not have internet access at home.

School officials believe the district is the only district in the Capital Region that has WiFi on school buses.

This initiative is part of the district’s ongoing efforts to connect students to technology. About 1,300 students in grades five through nine have Chromebooks, and school officials were planning to distribute them to 10th-graders on Wednesday, according to MacPherson.

She said school officials are going to continue to phase in the program in the 2017-2018 year.

Superintendent of Schools Linda Goewey said the hot spots give students the opportunity to access the internet outside of school and communicate with their teachers.

Goewey said it only makes sense that students should be able to access technology on the go. She can access her work from her phone and email.

“I feel it is our world. It is our students’ world. They are techies and we are too. Communicating by Chromebook or phone or whatever it is, is the mode of our students and we need to be teaching them in a way they are accustomed to,” she said.