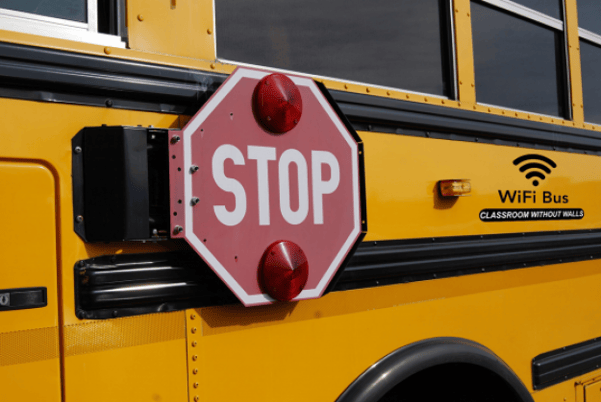 But Beekman Central School District officials in upstate New York found a way, joining a growing roster of schools that have outfitted their district's fleet of school buses with W-Fi technology. Thanks to their efforts, students who often commute an hour or more by bus each day are making more valuable use of their time.

But the Wi-Fi-equipped buses are also making life more productive for student's in Beekman's athletic department. Travel to school-sponsored athletic events can often mean a three-hour journey round trip, leaving students working until late at night on their homework on game nights – and drained at school the next day.

“If you’re looking for an easy way to capitalize on a student’s time, [Wi-Fi-equipped] school buses are the answer,” said Gary Lambert, Beekman’s director of 21st century learning.

The school-bus project is part of the district’s “Connect 100” program, which has set a goal of having 100 percent of its students to feel more connected to their schools. “We want access on the buses to mirror what students have access to in the class,” Lambert said.

Beekman’s smart-bus technology is provided by Kajeet Inc., a McLean, Virginia, based firm that provides mobile technology to support education. With Kajeet SmartBus, districts can purchase data in bulk from their choice of the two leading 4G LTE wireless broadband networks in the nation. Robust filtering and reporting features come standard with SmartBus, ensuring that students are using Wi-Fi for its intended educational purposes, according to Kajeet.

In the Beekman school district, smart buses also help mitigate the problem of digital inequity among students, Lambert said. A recent survey found that 30 percent of student in Beekman County don’t have internet access at home.

In Liberty County, Ga., officials are using Kajeet’s SmartBus technology expressly to address and try to overcome the digital divide. The school district will outfit all of its school buses with Kajeet’s mobile Wi-Fi units so that low-income students can continue their studies outside of the class in digital “homework zones.”

The county will create 24 such zones by parking Wi-Fi-enabled school buses in areas near apartment complexes and fire and police departments. Students can use the homework zones from 2:30 p.m. to 11:30 p.m. during the week. The zones will let low-income students to access educational and safe, school-district approved Web sites, county officials said.

When Liberty county launched its one-to-one iPad initiative, called the Liberty Learning Experience, in the 2014-2015 school year, students began relying more on digital textbooks and applications. But district officials recognized offering iPads wasn't enough after determining that approximately 60 percent of students did not have access to the Internet.

“The more technology we integrated into the curriculum, the greater the need for connectivity at home,” said John Lyles, director of transportation for Liberty County. “We want to ensure no student is left behind because he or she doesn’t have the tools for success.”

To determine what parts of the county would benefit most from Wi-Fi outfitted school buses, the Liberty County team analyzed its bus routes along with where the largest concentration of their low-income families reside. Where the buses are parked can vary, according to Lyles.

“Liberty County is the first district in Georgia to outfit its entire bus fleet with Wi-Fi and park the buses in areas to help its students complete their homework, and ultimately succeed,” said Daniel Neal, CEO and founder of Kajeet. “This is a creative solution to a very real problem in the community.”

Drivers of smart buses have reported that students are engaged and working on assignments during their commutes and instead of getting into some kind of trouble, often arising from boredom, according to school officials.

Beekman county officials say that behavior incidents on school buses have declined by 50 percent since access to the internet was installed on the vehicles.

Are Rural Students the Next Priority

How IoT-Based Devices Are Helping