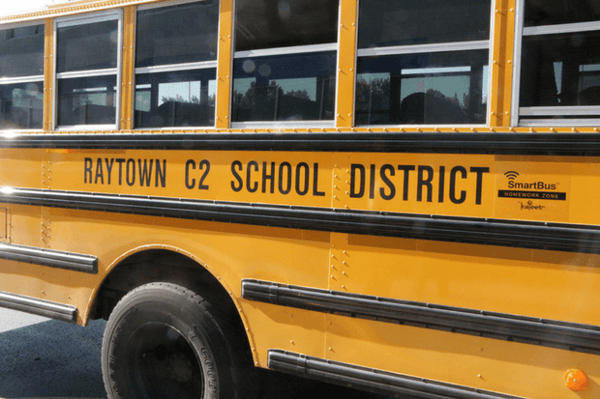 The Raytown School District in Missouri is committed to providing its nearly 9,000 K-12 students, more than 50 percent of whom qualify for the free and reduced-cost lunch program, with an educational environment where they can develop a rich understanding of 21st-century skills. As part of this effort, the district implemented a 1:1 technology program that allows students in grades six through 12 to take devices home with them.

With a goal of staying at the forefront of technology and providing students the best transportation experience possible, Melissa Tebbenkamp, Raytown’s Director of Instructional Technology, and Kevin Easley, Director of Transportation, saw an opportunity to take the 1:1 program even further by closing an additional connectivity gap in the students’ day: the school bus ride.

PILOTING CONNECTIVITY ON BOARD

Because Raytown is one of 10 districts in the country to operate a four-tier bus system (one bus drives high school, middle school, and elementary school routes in one day), Easley realized that one bus with Wi-Fi could touch almost 200 kids every day. Bus connectivity would also allow the district to take advantage of other technologies available to today’s school buses, including GPS for tracking buses and full integration with Raytown’s routing and security video systems.

Tebbenkamp suggested they test the Kajeet SmartBus™ as a potential solution. Beginning in April of 2017, Raytown began a six-month, six bus pilot with SmartBus, equipping each of the pilot buses with 4G LTE connectivity pre-configured with safe, CIPA-compliant filters. These filters ensure students are protected from harmful material on the web and they are focused on educational-content only, not social media sites like Facebook, Twitter, Snapchat, and Instagram.

To get an accurate sense of the program’s impact, Easley strategically selected the buses to participate in the pilot, including buses that run regular routes, special ed routes, long and short routes, and those with a range of disciplinary records to ensure there was a variety of buses for the pilot program.

With access to Wi-Fi to and from school, students riding the pilot buses were able to do their homework, review materials for tests, explore topics of interest, and work on their creativity and collaboration skills during their morning and afternoon commutes. Some of the most popular educational sites accessed included PBS.org and coolmath.com. For students involved in activities or athletics requiring travel, SmartBus connectivity gave them the ability to work on their homework while on the road so they wouldn’t have to stay up late to complete their assignments after a long day out.

When the pilot was complete, the impact of SmartBus was clear: “Wherever we put them,” says Easley, “they were used by a high percentage of students, and they had fewer incidents of misbehavior.”

A DRAMATIC DECREASE IN DISCIPLINARY REFERRALS

In fact, one of the most striking outcomes of Raytown’s SmartBus pilot program was the degree to which disciplinary referrals decreased once students had Wi-Fi connectivity available to them on the bus. Prior to having Wi-Fi in transit, there were 105 disciplinary referrals across the six pilot buses. Afterwards, that number dropped to 58—a 45 percent decrease overall.

“I was not surprised to see that when kids are busy and have something to work on, they’ll stay out of trouble. I was shocked at the anecdotal and data reports of how much better it was, though. I wasn’t expecting those kinds of numbers.” 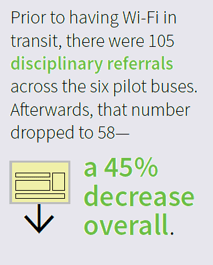 In addition to fewer negative calls home, Tebbenkamp explains that a drop in incidents has a ripple effect in other areas as well. Bus referrals are sent to the school to investigate, where it takes about 30 minutes on average to process from start to finish. A big decrease in disciplinary referrals translates into reduced administrator time spent processing the incident and an increase in class seat time for the student.

Considering Raytown previously averaged approximately 500 bus referrals per year, the district estimates that having the entire fleet equipped with SmartBus connectivity will save around 112 hours of administrative time each year.

“For every one of those referrals that we save, we’re giving the administrator an opportunity to work on something else and work with teachers to improve instruction. Plus, we’re saving at least 10 minutes of seat time for that student” adds Tebbenkamp. For every referral, the student involved is brought to the administrator’s office, therefore missing class time because of a school bus incident.

Bus connectivity is also turning out to play a role in attracting and retaining good bus drivers, which has become critical as the country experiences a shortage of CDL drivers across all forms of commercial transportation. From the SmartBus pilot, Raytown has received very positive feedback from even the most skeptical of drivers, who’ve discovered that there’s no extra work required of them, everything operates automatically, the system is extremely user friendly, and students are quieter and better behaved.

“We’re constantly looking for drivers, and drivers talk to each other. If Raytown can get the reputation of supporting drivers and having equipment that supports them, we can attract good drivers and retain more of them.”

THE ROI OF SCHOOL BUS CONNECTIVITY

When it came time for Tebbenkamp and Easley to present their findings to the school board, the results spoke for themselves. After sharing the capabilities and showing the benefits, they say it did not take much to convince board members that bus connectivity is good for the students and good for the school district. Tebbenkamp notes that even in the midst of other budget cuts, the board made sure funds were approved
for the SmartBus program; the data was that powerful.

As for the parents and students, the feedback has been equally positive. Although the district is still in the process of rolling out SmartBus fleet-wide, the capabilities that bus connectivity promises are in hot demand by parents. In addition to helping close the Homework Gap and improving the ratio of positive calls home, components like GPS route tracking and live video are seen as key security features that will
give parents increased peace of mind about the safety and whereabouts of their children.

The students, meanwhile, love having Wi-Fi on board, and once they’ve experienced it they do not want to go back. It’s even enticed some kids who hadn’t previously been bus riders to want to start taking the bus to school — another factor that can help improve safety, considering that the NHTSA (National Highway Traffic Safety Administration) has found that students are much safer traveling to and from school by bus than by car.

Easley notes that Raytown’s heaviest usage of bus Wi-Fi is by middle school kids on their morning commute. Because he gets a report of the sites they’re visiting, he can see the blocked ones they’re trying to access and knows that the filtering means he doesn’t have to worry about them visiting sites they shouldn’t. By filling this connectivity gap, he adds, Raytown is helping its students learn how to use the computer responsibly at an early age.

Looking ahead, Easley sees a number of benefits in terms of day-to-day operations of the fleet. With 23 new hires this year, driver retention will continue to be a key priority, and anything that makes the driver experience a positive one is a plus. Additionally, features like GPS tracking and the ability to run reports will allow him to head off risky driver behaviors, such as abrupt braking, hard turns, and speeding, which can lead to accidents or costly mechanical problems.

“My vision is once you get Wi-Fi on the bus, you’ve taken out the limitations on most things,” he says.

That’s certainly how it feels for the students who’ve had the opportunity to use their daily commute time more productively.

“If you think about the bus ride, it bookends your school day. If you can start and end your school day on a positive note, that will improve your overall perception of school. It can only have a positive impact.

Shoot for the conversion with a compelling call to action

Shoot for the conversion with a compelling prompt. Give them another opportunity to convert by clicking on the call to action to the right.